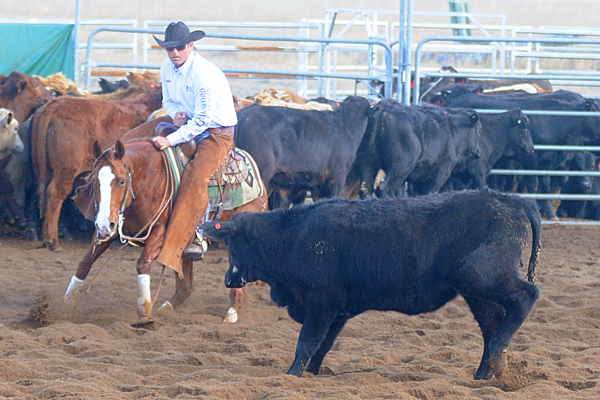 Twelve year old spinifex mare Spinnies Bolero has nearly recovered from a serious lung and stomach infection that interrupted her amazing comeback after a five year absence from the cutting pen.

“We thought we were going to lose her” says the mare’s owner Marg Dunn. “Tammy” was to be shown in the rich Open and Open Non Pro Cutting events at this years Goondiwindi Futurity but instead spent the week in hospital on a drip. She has now recovered and doing well, but is still on antibiotics.

The little 14hh chestnut mare with the Baldy face came out of retirement after being sent to stud five years ago. Her first outing was at Paradise Lagoons in July.  Margs’ husband Peter rode her in the Open Non Pro for a second place, then under the guidance ofQueenslandtrainer Heath Sinclair took fourth spot in the prestigious event.  That same weekend at Ridgelands “Tammy” won the Open with Heath once again on board, and then daughter Hollie rode her to another win scoring a 73 in the youth. Peter also had success with her by placing in the open non pro.  “Heath had never ridden her until we asked him if he would like to show her atParadise, after he rode her he said the cows are bigger than her but it’s almost as if she looks up at them and say’s come and get me”.

The Dunn family bought this brilliant mare 8 years ago.  “I was wanting a cutting horse for myself, says Marg, Peter said it might take awhile but rather than buy something for sale wait until I see something I like then go and ask if they want to sell”.  Marg saw Tammy at the Toowoomba Futurity with Russ Benson aboard, “this gorgeous 14hh baldy mare was just what I wanted.  Brian Cobcroft owned her, I asked Russ if he would sell her, Russ came back to me with  “Cobby said no, she’s the only Spinnie out of Doc’s Housekeeper that he had.” Darn! “

A few days later at the Goondiwindi Futurity Russ approached Marg with a smile. Cobby decided to sell because she was too small for him to ride, “I ran and wrote a cheque out straight away!  I remember Todd (Graham) and Donna Hawkins couldn’t believe he had sold her, Todd thought she was pretty special”.
Initially trained by Todd Graham Tammy went to Russ till the middle of  her Derby year.  “When we got her home I rode her and discovered she was too quick for me,  so Peter showed her.” In her first classic year, Stylish Artist a young stud that the Dunn family used to own got in and bred her. “I only ran up to the  house  for 5 minutes,  we decided to keep the foal so when Pete showed her at Tamworth in the classic, she was very pregnant and her belly was just about touching the ground, I remember Stuart Keller coming up and saying ‘I Think you should put Tammy in the paddock when you get home!!  She finalled!”

After they weaned the foal  Peter showed her at the Comet futurity and the pair won both the open and non pro classic challenge. The foal was Stylish Bolero a gelding now owned and still being shown with success by Jason Richards.

The Dunn’s have a filly by imported stud CD Olenas Dually  which is now being prepared for next year’s futurity.  “The following year Pete decided to breed her to Oaks Jack Hammer so he could get a very close line to Miss Helenita and Mrs Doubtfire who are also out of Doc’s Houskeeper and by Doc’s Freckles Oak this filly is presently being broken in”. Spinnies Bolero’s last foal is by One Time Pepto.

“After being out for a few years I decided I wanted to ride again so I weaned the foal and within 3 weeks she’s in the show pen, udder and all!  She hadn’t forgotten one thing, and again quick! Our plan is to continue to show her until the end of 2012 when we will bred her again. Tammy’s one of those mares that is very special to a lot of people. She just loves cutting, you can see it in her”.