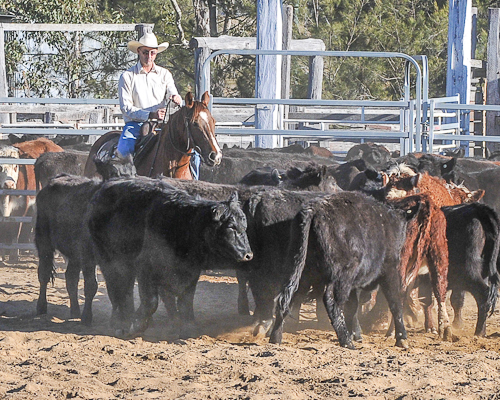 They say being on a club committee is a thankless job and to a point it is.

Yes a please and a thank you does go a long way, but when I get home from the long drive after a show and read the success stories on social media, I feel a sense of achievement nonetheless, that something I was involved with has put a smile on someone’s dial.

As I enter the twilight of my show secretary career a look back on the on the past 7 years stirs many emotions. And as I reminisce I ask myself why did I do it? The answer is quite simple, I did it for the people who frequent the shows run by the club that adopted me, the SQCHA.

When I first dipped my toe into the photography puddle I went around and photographed a variety of equine events. At my very first cutting event I went to a little place called Dayboro and was quite amazed at the friendliness and genuine warmth of the people who competed in cutting and was also awestruck with what a great sight it was to see a fully trained cutting horse in flight ….. and what a challenge it was to photograph them.

At the time I got some good interest in my photos and continued doing the rounds and found myself at another cutting show in Boonah. To cut a long story short I eventually found myself coming back to the SQCHA cutting events more and more and the other events less and less. In a sense I didn’t pick cutting, cutting picked me. It’s thanks to the people at SQCHA, their support and acceptance, that got me going with this thing in the first place. So when I accepted the position as their show secretary it was a chance to give back something to those who gave me a leg up.

Back in those days the SQCHA shows were little jackpot shows and all committee members volunteered their services for free. As the shows became bigger Championship shows and the popularity of cutting continued to grow in the area, it became harder and harder to get people to put their hand up to volunteer. As a result, and following the trend of other clubs around the country, the secretary and treasurer positions at the SQCHA became paying jobs based on a few dollars per run. An arrangement that remains in place today.

As the shows got bigger the time required to organise these events started eating into the other areas of my life so I decided to work on a system that would make both mine and the club treasurers life easier. The Cutting Horse Show Management system that we were using was pretty old hat and the randomness of the draws that the program created was an issue for some competitors, it seemed they were being drawn at the end on a consistent basis. Our treasurer had already moved over to MYOB so the accounting part of Cutting Horse Manager had already become redundant.

A lot of hours were spent building this online system over a period of many years, but now thanks to those efforts my job is a heck of a lot easier and less time consuming. I’m very proud of what I achieved for someone who is self taught in the art of web design coding. To see other clubs express interest in my system was a great thrill and to see the Cotton Country Cutting Club use it successfully and easily was a very satisfying experience indeed. Now that the NCHA has their system in place it will be a very sad day for me to say goodbye and walk away from all of that hard work. Imagine you’re an artist and you spend years and years painting your masterpiece and finally when it’s completed, someone storms into your gallery picks it up and throws it into the fire to burn away. The day I am expected to ditch my system by the NCHA will be a very gut wrenching day for me and I sense that day is not very far away. I hope the NCHA will deal with the situation with some thought, understanding and empathy, but in my experience I very much doubt it, that’s not their style.

The new system built by the NCHA will be a great help to those secretaries who are stepping up from the old clunky Cutting Horse Manager, but for me I will have to spend extra time learning a new system that will be totally alien to me and bring me great sadness.

Despite developing something that did simplify the task of producing draws and taking entries and payments, a lot of time is still spent behind the scenes. I’m glad those people who phoned me when I had just sat down to dinner, or just switched my favourite TV program or while I was in deep thought , writing a story or creating a video couldn’t hear what I said as I went to the phone, sometimes it was to take some scratchings or verify an entry and to a few it was to take their entries the old fashioned way because they didn’t know a mouse from a keyboard. Despite these little annoyances, it was and still is a pleasure to deal with these people and I thank them for their courtesy.

Banking duties, NCHA paperwork to be mailed, BAS, Club Hi point awards all those little things that are taken for granted. They are all done by a small group of people. At the shows there are people erecting panels, putting up tarps, preparing the surface, organising the cattle, catering and so the list goes on. These people are generally unpaid volunteers. And when there are no shows, the time is spent making decisions, dealing with NCHA matters, annual audits, ordering buckles, ribbons and prizes and managing the bank balance. All done by a small group of people who find themselves on the club committee.

I’m proud of what I have achieved during my time with the SQCHA and I approach 2018 as a year in search of new challenges and pathways. I am excited about what might present itself in this search, for as they say all good things must come to an end sometime. When that time comes I will always look back on my time with the Southern Queensland Cutting Horse Association with great fondness. But the reality is I am just a name on a list and a face in the crowd and things will continue to move forward without me.

As the summer hiatus draws to a close, committee members around the country are quietly trying to pull some shows together for the following 6 months or so, the next show only weeks away. So next time you jump onto social media after a show spare a thought for the small group of people who put these things together, a please and a thank you goes a long way.