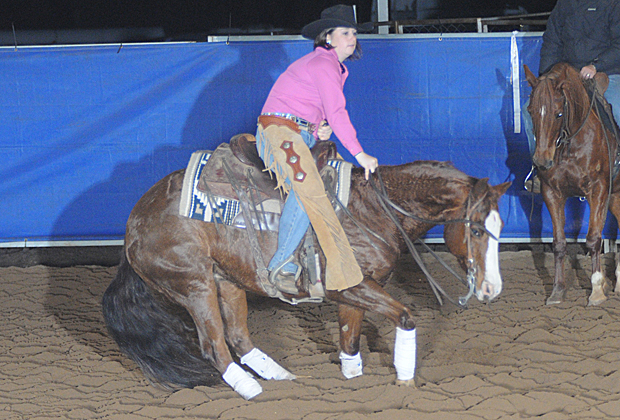 After her dad rode  “snoopy”  last year  to the NCHA Non Pro Futurity final  it was sarah’s turn to ride him at Tamworth this year and she didn’t disappoint. The pair scored a 145 in the first go and then followed that up with a 140 to make the final.  As eveveryone in cutting knows this sport can be unpredictable at times especially when it comes to finals. “When I first got on him just before the event he felt really good, he’s an easy horse to read, I just hopped on him and trotted him around and he felt really relaxed.  Heath (Sinclair) and Pete (Kennedy) picked me out some really good cows and it was the second one that won me the event, Snoopy really worked it tough”. Heath Sinclair agrees, ” Everything went to plan, Sarah cut the first cow we chose, then she really showed her horse on the second cow, that was the one that won it for her, she then finshed it off well with the third cow”. Of her riding ability Heath says this, “She’s cool calm and collected, listens well to instructions and has a lot of confidence.”

Sarah has now earned well over $20,000 in prizemoney and is yet another example of the outstanding young riders that are emerging from the sport.  The second year criminology student credits her success to a large number of people but says that Phil Dawson and Aaron Wheatley were her main influences, “I’ve spent a lot of time with both of them, Phil taught me a lot about how to show a horse, he’s really good at that and Aaron – his work ethic is just amazing, he’s such a perfectionist, and of course it showed with the results he acheived at this years futurity”.

After finishing high school Sarah took a sabatical and worked with Phil Dawson for about 7 months. “She was just a pleasure to have around.” says Dawson, “She is very talented, has a great work ethic, lots of initiative, great listener and a very open mind to it all. She reaps what she sows.”
Aaron speaks highly of her too, “Sarah comes and helps me out from time to time and turns back for me on occasions, she’s very hard working has good balance and good timing”.

With two very large gongs to her credit for 2011 Sarah will now concentrate on her studies and will next be seen competing next at this years Victorian Futurity.