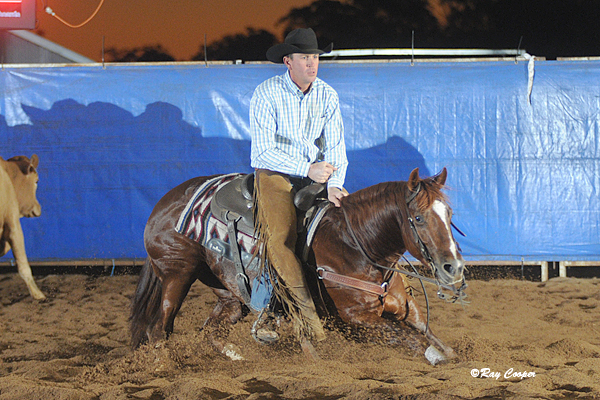 When a lifetime mate calls you up from the other side of the globe and asks you to find him a Cutting bred stallion, naturally you go out and find the best you possibly can.

And that’s exactly what US based trainer Chris Cox did for his mate Australian Cattle Property owner Ray Heslin.  “I knew that Phill Rapp had a very good three year old mare, says Chris, “so when I saw her full brother listed in the Western Bloodstock NCHA Futurity Sales I thought I’d go and have a look”. The horse of course was Tapt Dancin Cat.

That mare of course was World Record Holder Don’t Look Twice, who to date has accumulated earnings of over $600,000 and is only a five year old. “The cutting horses over here are getting smaller and smaller and are losing their feet, “Tapper” had good feet, strong bone, good balance and a kind eye. I got him X-Ray ed and everything was clear, I bought him through the sale as a yearling.”

Chris Cox and Ray Heslin have been mates since they were kids. Born in Florida, Chris’s family moved to Australia when he was two years old. During his time living in Australia he learned about horses through his own experiences and also through workshops and working with the likes of Ken May doing colt starting and Horsemanship clinics. At the age of eighteen he flew back to the united states. Today in the US Chris Cox has touched the lives of many through his horsemanship skills, he travels the country with his Ride The Journey show and hosts his Chris Cox horsemanship show on RFD TV.

In contrast Ray Heslin is a relative newcomer to the cutting horse industry. He runs 20,000 head of cattle up in the Gulf and has done a little bit of drafting. Through good advice Ray now has two of the best cutting horses in Australia with Tapt Dancin Cat and his mare Peptos Pistol. He has also imported another colt by One Time Pepto out of a Smart Little Lena mare, which is currently in training with Todd Graham. ” Todd likes him, he says he’s really cowy and stops real good”. Of course he’s chuffed with Tappers achievements to date. “Richard Bull saw him compete and Fort Worth and after seeing him win the Derby here, he commented on how far “Tapper” had come in such a short time.”

When Chris Cox started Tapt Dancin Cat he was immediately impressed ” He has a great mind, very kind, you don’t get many horses that can bend and flex like he can with that size and strength.” As Chris’s horsemanship commitments grew a decision had to made on “Tappers” preparation for the 2010 US NCHA Futurity. “I was originally going to send him and his stablemate Desires Blue Trinity to outside trainers but then a young man by the name of Chris Johnrud joined my cutting operation so I decided to hand them both over to him”.

“Tapper” narrowly missed the semis by a point while his stablemate made it into the Final. He was very unlucky he just got better with every run all he needed was confidence, by the time he got to Australia he had a great foundation”.

By the time he got out of Quarantine, Australia’s Leading Trainer Todd Graham only had a month to prepare “Tapper” for the NCHA Derby here down under. As we know Tapt Dancin Cat became Australia’s latest Open Derby Champion, he then followed that up by winning the first go round of the Toowoomba Futurity, Reserve Champion at the Goondiwindi Futurity and taking out the Open Derby honours down in Victoria. “He’s pretty awesome” says Todd, “he’s very quick and very cowy, he’s the best bred Stallion to come to Australia”.

Chris Cox has no doubt about “Tappers” potential too, “Had he stayed here in the states there is no doubt he would have done well,he can mix it with the best, in fact I have no doubt that eventually he would have overtaken his stablemate, he just gets better and better”. His stablemate has earned $120,000 this year including the Abilene Spectacular Open Derby title.

Tapt Dancin Cat is standing the breeding season at the newly formed Quipolly Breeding Centre and naturally Ray Heslin’s mare Peptos Pistol will be one of his breedings, Chris also will be importing “Tappers” semen for the US market.  “He is going to be a great cross for the Australian bred horses. In fact he will be a great asset to the campdrafting industry too. Australia imported the best sons of Docs Oak in the world the US has missed the boat on that one”.    Tapt dancing Cat traces back to Docs Oak through his Dam Tapt Twice herself an earner of $279,457.17 in the cutting pen.

“Tapper ” will once again been seen in the aged events next year with his next show likely to be the 2012 NCHA Classic Challenge and with him still getting better with each showing, Australia is in for a big treat. “He’s only at half throttle at the moment”, says Todd “his best is yet to come”.

Click https://themarketingheaven.com if you want to buy youtube video views, you don’t need to be fooled by some scammed providers.